Today we left St Petersburg and headed for two of the Romanov’s Summer Palaces, where they would spend the three months of the year that Russia counts as summer. There is apparently a saying that Russians spend 9 months in anticipation of their holidays, and 3 months expressing disappointment that the weather has let them down yet again.  St Petersburg has 300 days a year of rain/snow and no sunshine.  So we have been really lucky so far.  Today it rained, but it was drizzle and intermittent, our luck continues.

Maria was teaching us some Russian in the bus, Da for yes, Niet for no, Спасибо (written spacibo, pronounced Spa-Cee-Baa) for thank you, Baboushka for grandmother, Papa for father, Mama for mother, я люблю тебя (ya lyublyu tebya) which apparently is pronounced ‘yellow blue bus’ and means ‘I love you’  She tried a few more things, but I have to confess that is all I can remember, and by the time I get home will have forgotten those (except perhaps for the yellow blue bus!)

This was our first excursion outside the city itself, and as when leaving Venice, after which parts of the city were designed, it is a shock when the historic buildings give way to modern housing estates, factories and car sales places.  We did notice that petrol at 50p a litre was massively cheaper, perhaps the tax is not as great as in the UK! 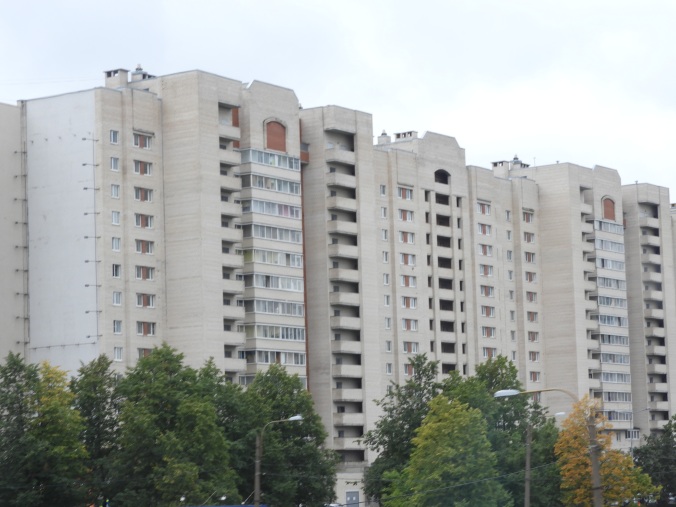 The first palace was built by Catherine the Great as a reward to her son Paul and his wife Maria for giving her a grandson, Alexander.  However she then doted on Alexander to the extent that she tried to have hi crowned king instead of her own son.

This palace is not on the regular tourist trail, it is the Russians that visit, so we had a quiet tour, able to see all the treasures in peace, and indeed there is a huge amount of gold leaf, crystal chandeliers, mirrors and paintings to see, plus the beautiful gardens. 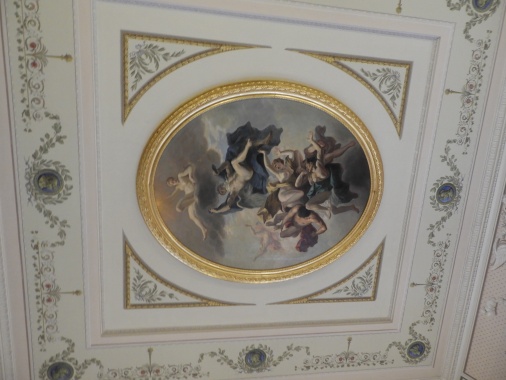 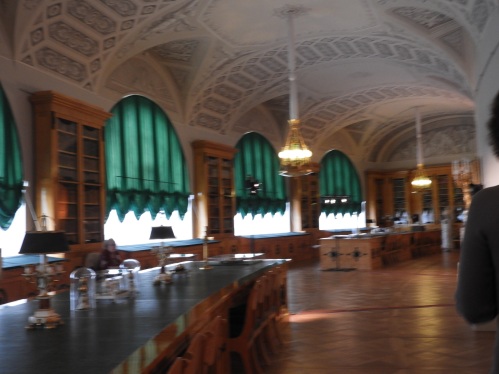 After leaving Paul’s palace, we headed to what looked like a small hunting lodge for lunch.  Again a lovely four course meal and coffee with friendly staff.  Poor Maria had to cope with catering for various dietary limitations, but all went smoothly. 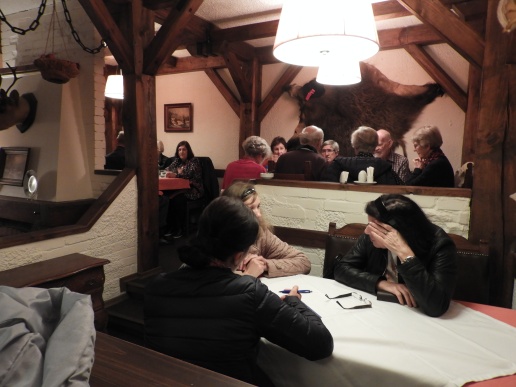 Off to the next Palace, this time Catherine’s own.  This was built in the village called Tsarskoe Selo, which in 1937 was renamed Pushkin in honour of the ‘Russian Shakespeare’ Alexander Pushkin.  We had been warned  that all the tourists went to this one, and we would have to fight our way through all the other nationalities visiting.  It started when we walked past Puskin’s statue, which was largely obscured by a sea of umbrellas (yes, it was raining again).

Turning in through the gates, we were faced with a very large queue of people standing in the rain.  Rather optimistically thinking that Maria would take us to the head of the queue, it seen became apparent that we were to join the end of the line. It looked as though it would take us over an hour to get in, but I suppose it wasn’t much more than half an hour, and then we were battling our way to one of the many cloakrooms.  This Palace was much larger than the last one, and heaving with people.  Having eventually handed in coats, we were off upstairs, led by Maria shepherding us with the radio headsets, a Godsend here, as we could so easily have got separated.  We went from room to room, each one seemed to contain more gold leaf than the others.  We also learned that the Germans had occupied these palaces during the war, and at the end of the war had wrecked them, setting fire to them and destroying them almost completely.  The Russians have been painstakingly restoring them ever since, there is still work to be done but they are almost back to how they were when the Romanovs lived here. 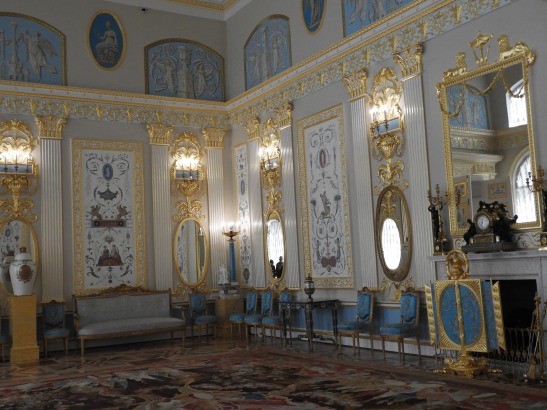 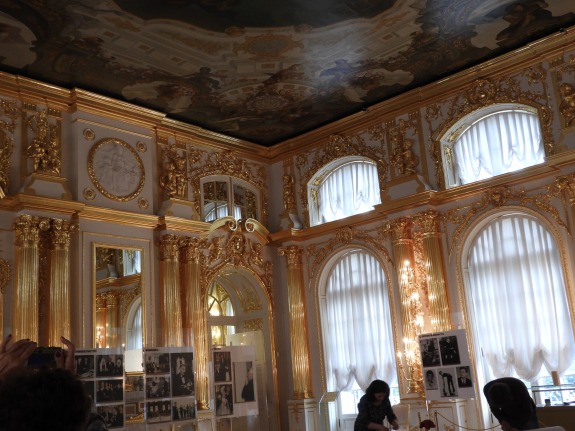 There is a bit of me that wonders whether a country that hated the aristocracy should spend this much time and money restoring the properties of those people, even if they are open to the public.  In the days of the communists, all schools healthcare and public building entrances were free.  Now there is a charge, not a major one, but perhaps some of these millions used in restoration could have been spent on better care for the poor.  Just a thought…..

One of the rooms of the palace, the only one where you cannot take photos, is the Amber Room, with the entire walls covered if different shades of amber stones.  Amber is said to be lucky, to provide healing, and to prevent ageing, Maria said we would out of there without wrinkles, sadly I did not notice any difference! 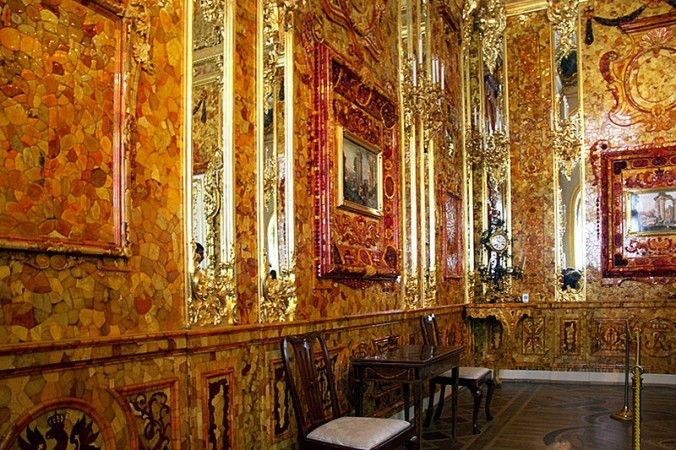 A poignant collection was the clothes and toys of Nicholas II’s children, all massacred along with their parents and servants in that one night.  The Romanovs seem to have a very violent history, Paul himself was strangled, Alexander blown up on the cobbles where the Spill Blood Church now stands, Nicholas’s grandparents also murdered by terrorists, and then the dreadful night in July 2017 when the whole family was slaughtered.

The rooms were much larger than Paul’s Palace and so despite all the hordes we were able to walk freely through the magnificent libraries, ballroom and dining room.  When we came to the end, the family church, which was still being restored and not open, we had to walk back underneath through the narrow passages of the servants quarters, that there was a bit of shoving going on there which continued until we have retrieved our coats and set off to walk through the gardens.  Maria explained that there were no bathrooms in the palace, even up to 1917 when the family was massacred.  The family members would call for a portable commode to be brought in, and for baths when went out to bath houses in the grounds, of which there were three to choose from.  There was also a ‘hermitage’ for Catherine to retreat to when she wanted to be on her own.  Because Catherine had blue eyes, the whole palace was repainted in blue, a change from the original yellow when it was first built.

Emerging from a gate at the bottom of the garden, our loyal bus driver George was waiting for us, and off we went to another shop, this one supplying free coffee and tea, where was our daily vodka?  It was there too, if anyone wanted it.  This shop sold jewellery made from pieces of amber left over in the restoration of the Amber Room.  Some where quite pretty, but I have never really liked amber jewellery, so I could resist buying anything there.

The bus took us back through the countryside and suburb into the centre of St Petersburg, and it was difficult not to nod off as darkeness fell outside.  A brief refresh back at the hotel and out to dinner, another three courses in a local restaurant. It is a long time since I ate heart, this one belonged to a deer, and was really tasty with cranberries and mushrooms.  I am not sure fettucine is really Russian, but my duck fettucine was lovely and creamy, and a sinful chocolate brownie with berry sauce to follow.  Now totally stuffed, back to the hotel to pack, we are off to Moscow in the morning.

St Petersburg has been far more beautiful than I could have dreamed of, the pastel coloured palaces everywhere, the canals, the welcoming people and excellent food.  We have been warned Moscow will be very different, not just the buildings, but the attitude of the people too, let’s see what tomorrow brings!